Trumpeter Swans may form pair bonds as early as their second winter and some may nest for the first time at three years of age. Most Trumpeters, however, don't nest until they are four to six years old.

Rarely, a cygnet may be pure white when it hatches, instead of the usual gray. It will have dark eyes and is not an albino. This white variant is known as a "leucistic" color phase and occurs more frequently in the Yellowstone region and South Dakota/ Nebraska,and Ontario than elsewhere. As adults, leucistics may have bright yellow legs and irregularly yellow on the bill.

Like other waterfowl, Trumpeter Swans molt all their flight feathers during mid-summer and are completely flightless for about a month. During this period they are particularly vulnerable and may act more secretive than usual.

Most Trumpeters lose substantial weight during the winter and the weeks prior to nest initiation are a crucial period. The females must find rich pre-breeding food sources to replenish their internal reserves for the energy demands of egg laying and incubation.

In 2018 I observed for the first time a predator attack by a pair of coyotes on a nesting pair of swans along the Knik River west of Hunter Creek. One of the coyotes was on the edge of a shallow water body attempting to rush in to catch a cygnet. The adult female swan and her 2 cygnets swam to the middle of the pond while the adult male swan stayed near shoreline defending against the attacking coyote. The male swan was using its wings to strike the aggressive coyote and keep it at bay. The second coyote was standing on shore watching the fierce action. The swan did not allow the coyote to advance toward the middle of the shallow pond where the cygnets were holding on for their lives.

After several rushing attacks by the coyote and about 5 minutes later, the coyote gave up as it was clear the male swan was too much for the coyote to reach the cygnets. The pair of coyotes trotted away from the pond disappointed. I watched the whole event while circling at an elevation in my Arctic Tern airplane high enough above the animals that they would not have noticed my presence. It was like being in a front-row seat watching a sporting event.

You can read more Swan Stories 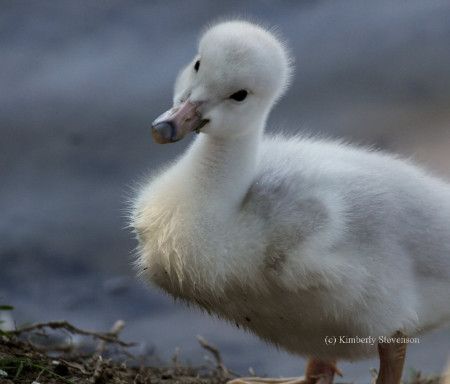 Do you have a Trumpeter Swan question?  Here are some of the most frequently asked questions.  Do you have a question not on the list?  You can e-mail your questions to us and we will do our best to answer them or find someone else who might know the answer.