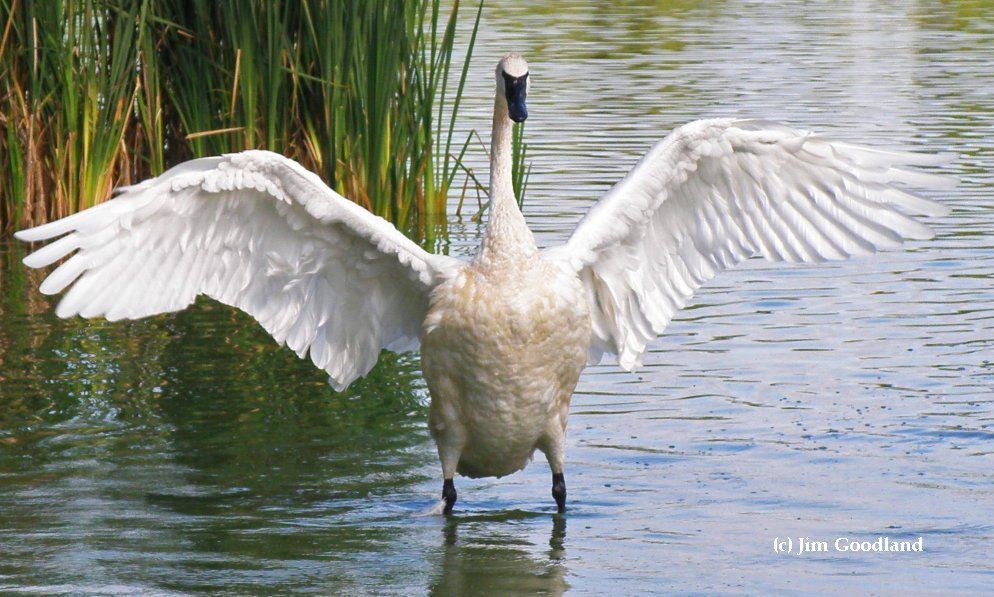 Trumpeter Swans are native only to North America. They are the largest waterfowl in the world. Although most populations are increasing, they are one of our least abundant native birds with about 63,000 Trumpeters on the entire continent.

Thirty-eight percent (24,240) of North America's Trumpeters summer in Alaska and Yukon and winter in the Pacific Northwest (Pacific Coast Population), with a few moving as far south as California.

Nineteen percent (11,721) of North America's Trumpeter Swans are in the Rocky Mountain Population which includes United States and Canadian flocks. The Greater Yellowstone region of Idaho, Montana, and Wyoming was the only place in the lower 48 states where Trumpeters escaped extinction. Today the United States Rocky Mountain Population, which also includes Oregon and eastern Washington, has less than 800 adult and subadult swans and remains one of the most vulnerable swan populations.

Forty-three percent (27,055) of Trumpeter Swans are reported in the Midwest, Central Plains, and Ontario (Interior Population). They are present due to restoration efforts. Nesting Trumpeter Swans there now regularly occur in 8 states and 3 provinces.

Your Society at Work

The Trumpeter Swan Society (TTSS) has been North America's leader of Trumpeter Swan conservation since 1968. Thanks to our donors, for over 50 years TTSS has played a pivotal role by providing expert science based technical support in the major restoration programs. Our vibrant "swan network" of researchers, swan managers, and biologists have gathered and shared the best science based information and research to help return Trumpeter Swans to areas where they have not been seen in more than a century.

Trumpeter Swans once flourished across much of North America. Tragically, by 1900 they were nearly extinct due to commercial and subsistence hunting. In recent decades, Trumpeters began a remarkable recovery thanks to the partnerships and passion of many people, organizations and agencies, with the expert technical support of TTSS.

As Trumpeters return, they face major problems including threats to nesting and wintering habitat, mortality threats from lead poisoning and powerline collisions, isolation and lack of flock connectivity in certain areas, and the need for new migration patterns.

With your help they will continue their remarkable return to North America.

Each Population of Trumpeter Swans has its own history, challenges and opportunities.

Our five general program areas address issues that may be in one or more Populations.

You can help. Learn more about the issues swans face, and join our efforts to assure the vitality and welfare of wild Trumpeter Swans.