Two people hunting in Holt County in far northwest Missouri were arrested after killing a trumpeter swan and wounding a smaller tundra swan, which is also a protected species. Their shotguns and the dead trumpeter swan were seized as evidence, and the case is now in the hands of the U.S. Fish and Wildlife Service for prosecution. Read more...

It may sound corny but it's literally 'Swan Lake' in Heber Springs, Arkansas

HEBER SPRINGS, ARKANSAS: "The sounds of Christmas are different in Heber Springs. Each year, hundreds of trumpeter swans flock to Lake Magness for winter. It started in the early 90’s when a storm threw the swans off the normal migration pattern." Discover Arkansas visits Heber Springs- watch the videos as well. See more...

Note from TTSS: This change could be very detrimental to habitat for Trumpeter Swans and many other fish and wildlife.
From PBS intro: A new Trump administration proposal would reduce safeguards to millions of acres of waterways by removing federal oversight over smaller streams and tributaries. Judy Woodruff talks with Coral Davenport of The New York Times about how the plan would reverse decades of policy and how both industry and environmentalists are responding. Read the transcript...

The Trumpeter Swan Society's recent purchase of two swans for our Oregon Restoration Project was shared on Associated Press.
BEND, Ore. (AP) — Oregon's trumpeter swan breeding program has a new pair of the elegant white water birds as part of its ongoing bid to restore the population of the species after it was hunted to near-extinction.

A 4-year-old male arrived at the Pronghorn Resort near Bend from Pennsylvania and his mate, a 3-year-old female, came from Indiana, The Bulletin reported Monday...The pair represents a potential boost to the state's recovery effort. Read more...

Trumpeter swans dive in for a visit at Topeka Zoo

Topeka, Kansas. "While the Topeka Zoo’s used to visitors coming every day, two Trumpeter Swans welcomed a pair of their guests this week. Two wild swans dropped in to say hello to the ones that live here, the Zoo says...Read more...
Note: Topeka Zoo cygnets have been used in The Trumpeter Swan Society's Oregon Restoration Project.

MN: Inside the Outdoors: Swans have their flight plan: it's departure time

"...A lot of wild creatures are in the flight business this time of year, too. They won't have to deal with long lines, lost baggage or flight cancellations. But theirs will be a more hazardous and arduous flight to a climate warm and hospitable enough for them to find food, hopefully survive the winter and — with more good fortune — make it back North to breed and raise the next generation of their kind." Read more...

Your Children’s Yellowstone Will Be Radically Different. Yellowstone National Park is famous for stunning geysers and big game that attract four million visitors a year. The park has played a pivotal role in the preservation of bison, gray wolves and grizzly bears and Trumpeter Swans. But the warming climate has brought changes so quickly that plants and animals may not be able to adapt. 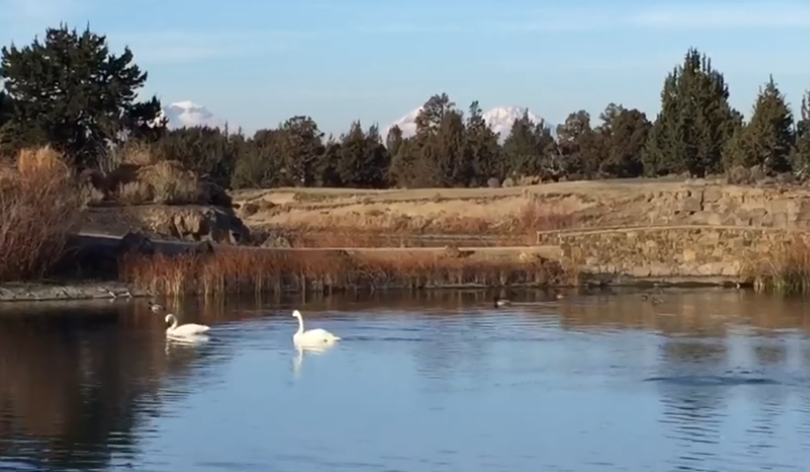 OREGON
An arranged marriage! TTSS recently purchased this pair, a 4-year-old male from Pennsylvania and a 3-year-old female from Indiana, to hopefully mate and produce cygnets for our Oregon restoration project. The video posted on our facebook page (November 14, 2018) was taken shortly after they first met this Monday, when they were placed on their new home at Pronghorn Resort, a golf club, near Bend Oregon. Video and photos by Gary Ivey.

Read more "My Swan Stories" on our 2018 Blog page. Read how an experience of trumpeter swans can lead to deep delight, partnerships, and a sense of wonder and gratitude.

Sydney the Cygnet Lives On

The Oregon cygnet hatched this summer at Aspen Lakes in Oregon continues to grow and thrive. He will be released at Summer Lake, Oregon next spring as part of our Oregon Restoration Project. Read the delightful story of his swan parents, brought together over time and miles through the dedication and partnership of many people and groups. 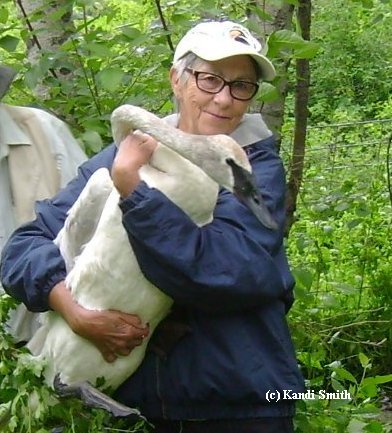 My Swan Story - by Kandi S.

My Swan Story by Kandi S. Over the past couple years, my husband and I have had the opportunity and pleasure to participate in the pre-release and banding of cygnets as part of the Flathead restoration project. The boots on the ground team included breeder John Jarvis, tribal biologist Dale Becker, a veterinarian and volunteers on the Salish Kootenai Reservation. Read more.... 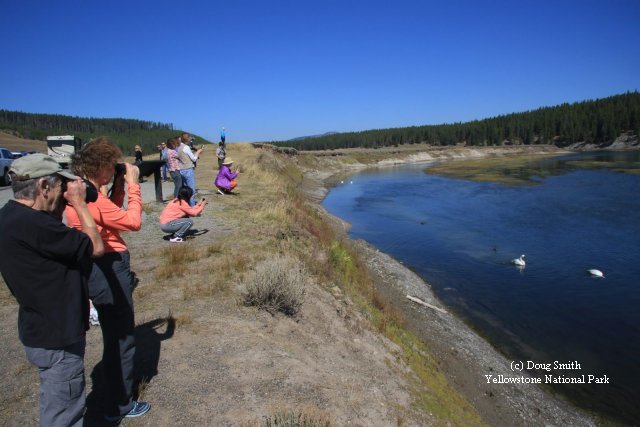 Why are Yellowstone’s Swans Disappearing?

The Trumpeter Swan Society is partnering with Yellowstone National Park to determine the causes of swan decline in the park. In Yellowstone National Park, the nearby Red Rock Lakes National Wildlife Refuge and surrounding region, about 70 birds remained. Now in a twist of ecological fate, what was once one of the last reservoirs of trumpeter swans in the lower 48 may blink out. Learn more... 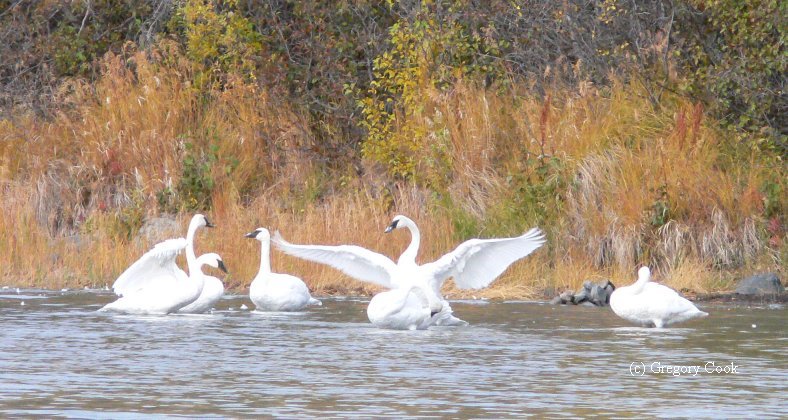 My Swan Story - by Gregory Cook

YUKON
We just returned late last night from a week in Yukon. The fall colors were extraordinary but so was the trumpeter swan viewing on Dezadeash Lake. 6 pairs, sometimes together and sometimes separated. Preening, feeding, resting, paddling around, paddling madly to get in full take-off mode before flying, speaking softly and trumpeting loudly--a fine panoply of behaviors and sounds played out against an overwhelmingly spectacular backdrop of color and Yukon mountains.

NICOLLET — An unlicensed hunter might face criminal charges after he shot and killed two trumpeter swans on a Nicollet County lake.

Other hunters reported the poacher on Duck Lake early Saturday morning, which was the opener of the waterfowl hunting season.

A Minnesota Department of Natural Resources conservation officer responded to the lake, which is part of the Swan Lake Wildlife Management Area north of Nicollet. Read more...

This story originally ran in the Fall 2018 issue of Audubon as “Triumph of the Trumpeters.” Read the story of the comeback of trumpeter swans to northwest Montana. The restoration effort of the Confederated Salish and Kootenai Tribes of the Flathead Nation is a remarkable two decades long story of patience, persistence and partnerships that restores the beautiful trumpeter swan and a cultural link to the Nation's heritage. Dale Becker, swan restoration leader, is past president of The Trumpeter Swan Society board. Note one of the captions is not correct. Neck collars are plastic while the leg bands are metal. Read more... 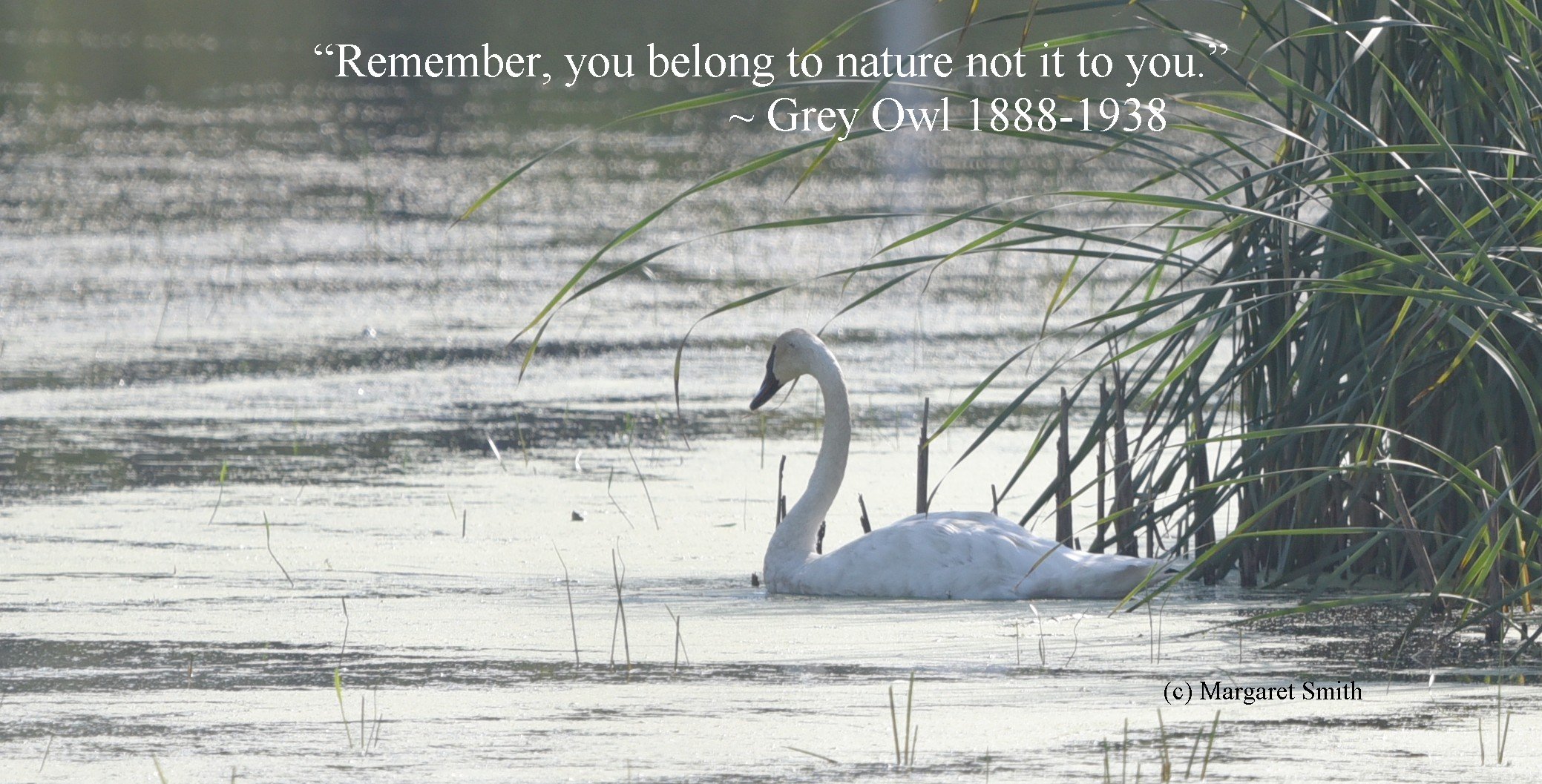 The first annual Saskatoon Island Fall Fair will be held on September 23, 2018 to celebrate the migration of the swans. The free festival will take place at Saskatoon Island Provincial Park. The event will feature performances from local artists, an outdoor market, nature activities and craft workshops, and photography tips and tricks. Read more....

Dave Ellis writes, "When it spreads its wings and does a wing flap after a preening session the pillowy softness of the under wing feathers of the largest bird in North America is reminiscent of a pure white angel spreading its wings." Read more and view the beautiful photos of a Trumpeter Swan in display, a photo of a Tundra Swan with typical yellow markings, and also a Mute Swan family with its cygnets (young of the year)...

PABLO — The Pablo Reservoir welcomed home four young Trumpeter Swans at the close of July. Although the swans had never set webbed-foot or white-plumage bodies in the waters of the small wetlands and upland grasses — the release of the swans were part of an ongoing restoration and reintroduction wildlife project from the Confederated Salish and Kootenai Tribes Wildlife Program to populate the valley once again with the feathered ones who had vanished from the area in the early 1900s. Read more...

STAINES-UPON-THAMES, England — By ancient law and custom, the queen is entitled to claim ownership of any wild swan paddling in her vast realm. This is because mute swans were viewed as royal birds, symbols of high status. Each year, in the third week in July, grown men in white pants squeeze themselves into brightly varnished skiffs, and, commanded by the Swan Marker to Her Majesty the Queen, a hearty 68-year-old bloke named David Barber, who sells boat engines, they row up the Thames and wrangle the swans to shore for inspection, marking and counting. Read more...

Wildlife officials working to re-establish the trumpeter swan population in Oregon expected to see baby swans hatch this breeding season in wetlands across the state, but not any at a golf course in Sisters. But late last month, a white fuzzy head popped up from the nest of Eloise, a resident swan at the Aspen Lakes Golf Course. Read more... 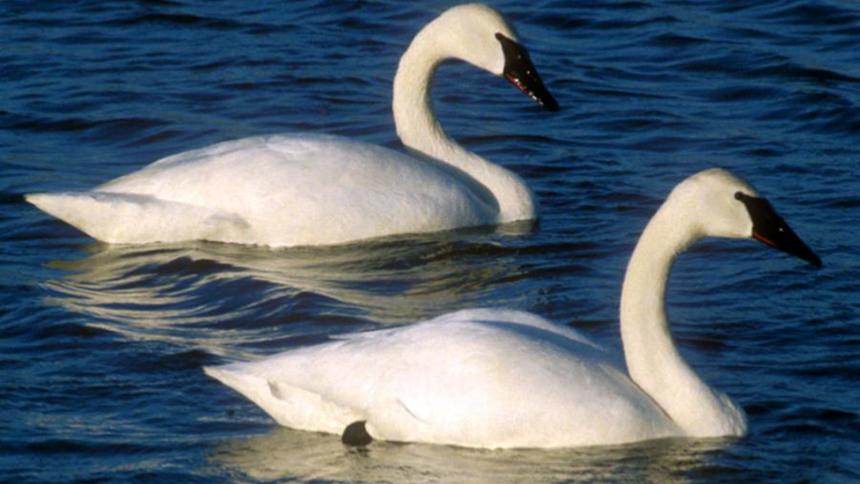 Trumpeter swans are doing very well in Minnesota. As abundant as they are today, one should know that the species came very close to becoming extinct throughout their North American range. Very few of the birds existed by the late 1800s because of over hunting. As was the allure of many other birds' ornate and beautiful feathers, trumpeter swans' feathers provided adornment for ladies fashions and, particularly, the highly fashionable hats that many women wore during the era. Swans were also hunted for food. And, along with widespread habitat loss, by the 1930s, only 69 trumpeters existed in all the lower 48 contiguous United States. None existed in Minnesota, but those lonely 69 birds persisted in southwestern Montana. Read more...

The Sunriver man accused of shooting and killing a beloved trumpeter swan, Chuck, on Thanksgiving pleaded guilty Monday in Deschutes County Circuit Court. Jordan Andrew Dupuis, 22, will be sentenced later this month. According to a plea agreement, Dupuis is expected to be sentenced to two years’ probation, two days in jail and 80 hours of community service. In addition, he will be suspended from hunting for three years, must forfeit his firearm and pay $3,000 in restitution to the Trumpeter Swan Society and a $1,000 fine to the Oregon Department of Fish and Wildlife. Gary Ivey, of Bend, a board member of the Trumpeter Swan Society, estimates the society and Oregon Department of Fish and Wildlife have spent $10,000 worth of time and money on Chuck since the society purchased him in 2011 from a bird sanctuary in Michigan. Read more... 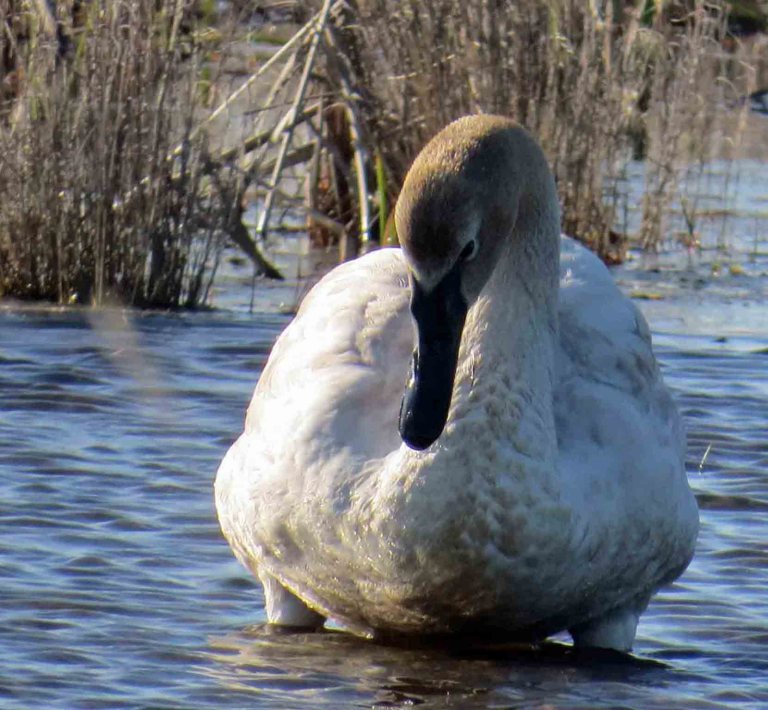 The first sighting of a Trumpeter Swan at North Carolina's Outer Banks made birders very excited. The Trumpeter Swan cygnet came in during a nor'easter and was separated from its family. Read about this special cygnet and its impact on the local community. "Ocracoke’s Trumpeter Swan may be gone but won’t be forgotten" by Peter Vankevich. Read more...

Read about changes to the Migratory Bird Treaty Act that are weakening bird protections, including those for Trumpeter Swans.
The Migratory Bird Treaty Act (MBTA), signed into law in 1918, is among the oldest and most effective wildlife protection laws on the books. When Congress passed the MBTA in 1918, it codified a treaty already signed with Canada, then part of Great Britain. The Treaty was in response to the serious overharvest of numerous bird species that had resulted in extinction in a few instances and near extinction in some species. Since 1918, the MBTA has broadened its international scope through treaties with Mexico, Japan, and Russia. The MBTA is credited with saving numerous species from extinction, including Trumpeter Swans.

It continues to protect nearly all native birds in the U.S. covering more than 1,000 species, including Trumpeter Swans.
Read more and learn what you can do.

Iowa has scheduled at least 9 swans to be released in southern Iowa in early May.

Cygnets from TTSS's partnership with the Oregon Department of fish and Wildlife and the United States Fish and Wildlife Service are released at Summer Lake, Oregon. The cygnet's father was shot on Thanksgiving Day, 2017 while on a river in Sunriver, Oregon. 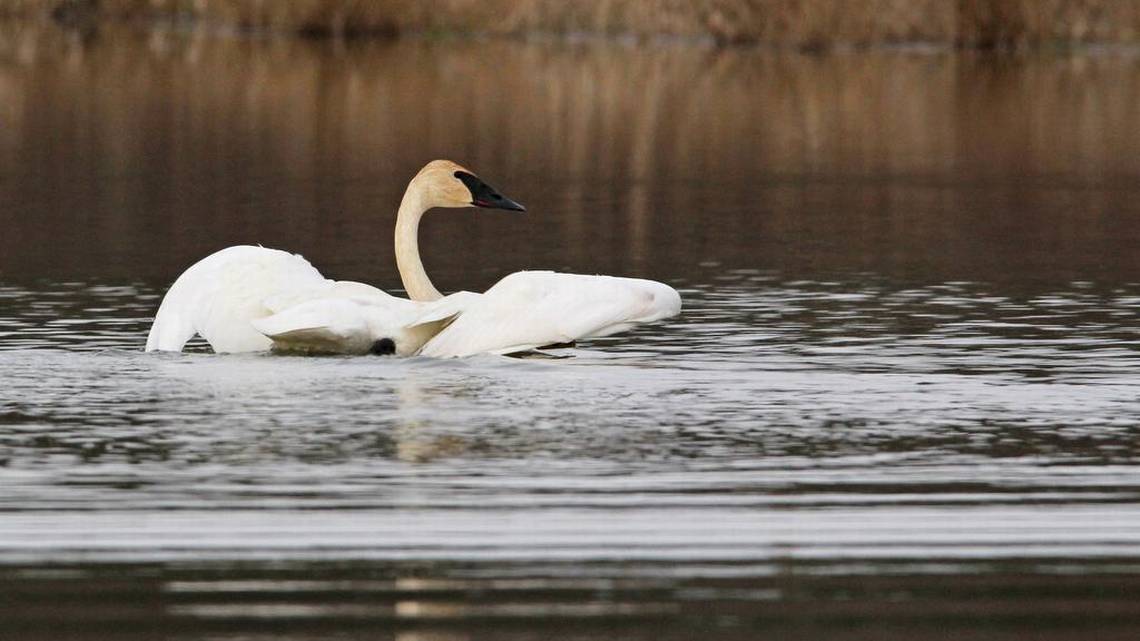