Celebrating 52 years helping Trumpeter Swans thanks to people like you!

The Trumpeter Swan Society (TTSS) is a non-profit organization, founded in 1968 and dedicated to assuring the vitality and welfare of wild Trumpeter Swans.

We are the only non-profit organization working for Trumpeter Swan conservation across North America.

You're invited to explore our website. See the impact you too can make for Trumpeter Swans.

Once again, Utah hunters kill too many rare trumpeters swans

UTAH: For the third year in a row, Utah’s swan hunt came to an early close after the trumpeter harvest breached a 20-bird quota set to limit the hunts impact on trumpeters migrating through Utah from the Yellowstone region. On Friday, November 26, the Utah Division of Wildlife Resources recorded the 20th trumpeter death, a threshold that automatically triggering an end to swan hunting for the season. The quota was hit 16 days before the season’s scheduled end of Dec. 12.Utah wildlife officials strongly discourage the killing of trumpeters, but they have yet to outlaw the practice even though some populations are struggling to reestablish their migratory patterns. All Utah swan hunters will likely be required to take a bird-identification course starting next year because too often they are shooting rare trumpeter swans. Read more... 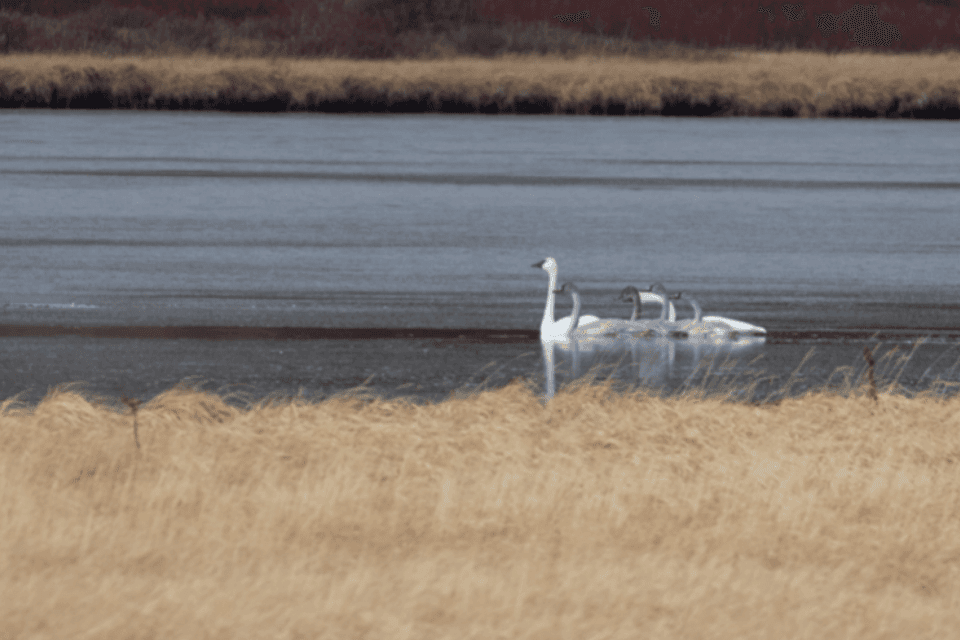 Of the four cygnets that were born on Swan Lake, one took a little longer to develop the ability to fly and was left behind when the lake started to freeze over. Sometimes when a cygnet is not able to fly before freeze-up in autumn, it will die. In this case, the weather warmed up and the lone cygnet was able to forage on their own in the lake. After about a week and a half, the family returned and reunited with the cygnet. The waiting paid off and the fourth cygnet was able to fly to find open water with the rest of the swans, says the park. Read more...

Swan Pause in Anchorage on their way south for the Winter

ALASKA: (check out the magnificent photos): "A group of at least 13 trumpeter swans and one tundra swan stopped to feed Sunday evening at Potter Marsh in South Anchorage as they migrate south. Trumpeter swans are found in a wide swath of Interior, Southcentral and Southeast Alaska. Alaska trumpeter swans overwinter from Cordova to the Columbia River. Swans often stop at the marsh in the spring and fall on their migration to and from nesting sites." Read more...

15 Things to do during fall around Grande Prairie, Alberta

ALBERTA: Trumpeter Swan viewing is one of the highlights for a wonderful autumn experience.

MONTANA: "In an effort to better document the expansion of trumpeter, the Tribal Wildlife Management Program of the Confederated Salish and Kootenai Tribes annually surveys wetlands on the Reservation to record nesting attempts and production. The Tribal Wildlife Management Program staff is requesting observations from the public of trumpeter swan nesting and production of cygnets throughout our area." Read more...